“A leader is the one who knows the way, goes the way and shows the way.” – John C. Maxwell

Investiture Ceremony is not just about providing titles, but about conferring responsibilities to the students, to take charge of the College and take it to the height they desire with their leadership and decision making skills, communication and teamwork.

Student Union Investiture ceremony was held in a grand manner on 9th July 2022 in our college auditorium. The ceremony began with prayer service by Mrs .Pushpa (Lectuter in Chemistry ) and Mrs. Divya (Lecturer in Biology), this was  followed by a Invocation dance by Sandhya of II EBAB.Ms . Mrs.Elizabeth(Lecturer in Commerce) delivered the welcome speech. Ms.Samar Hafeez, is our guest of honor. We are proud to tell that, she was our former student. She is a psychologist and a certified Holistic Health and Wellness Coach practicing in Bangalore  .

Miss Faariya Habeeb is elected as the Union President and Ms. Umme Almas,as the Union Secretary of the student council  . Principal Rev.Sr. Rincy Joseph administered the pledge to the newly elected student union members .The Secretaries of various clubs and the class prefects took the oath with  a promise that they would carry out their duties with integrity , faith and excellence . During the swearing -in ceremony the members of the student council were bestowed with badges for their respective posts. The chief guest Ms.Samar Hafeez spoke on the topic ‘The effects of social Media on students”. She emphasized on the harmful effects of mobile phones addiction, which is commonly found among students.  Students of II PU performed an enthralling and mesmerizing dance for their Juniors , which  blew the audience minds . Besides Investiture Ceremony, we also had Fresher’s Day for Ist PU students. Leema Rani.G.S of I PCMB’ A’  is crowned as the Freshie Queen of St.Anne’s. The ceremony  was concluded with National Anthem . 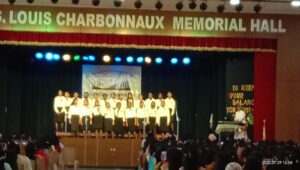 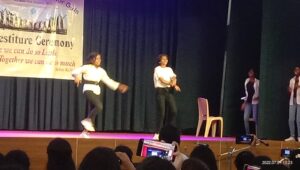 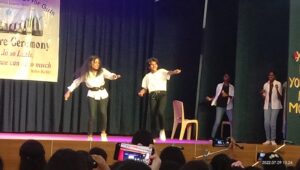